The Public Library and adjoining Carnegie Lecture Hall were built by Workington Town Council for the charitable sum of £7,500 funded by Scottish-American Philanthropist Andrew Carnegie. Like many other municipal projects of the time, several architects were invited to submit their designs for the new building. The open competition attracted 74 entries and the winners were Messrs W.A Mellon and George Wittet (of York). Alderman R.E Highton formally laid the foundation stone for the new library on 10th September 1903. The contractor for the red sandstone building was Messrs J.I Wilson and Co.

The building officially opened to the public on 6th October 1904. From 1907 The Council Chamber (Now Monroe’s Bar) was located to the Carnegie Library and was used by the Borough Council for its meetings. The walls were adorned with large portraits of the town’s former mayors which included Henry Fraser Curwen and James Duffield.

In 1911, the Council purchased an adjoining house which was gutted internally to provide an adequate Variety stage. The Lecture Hall which became and still is a theatre could hold 400 people and was transformed into a picture house in the earlier days of cinema. The Lecture Hall operated as a Cinema until 1958, often being referred to as ‘The Ranch’ due to the regularity of western movies being shown. It is likely that the Lecture Hall became a Variety and ‘Kinema’ venue to help earn sufficient income to pay the wages of the Librarian and aid the purchasing of library books. 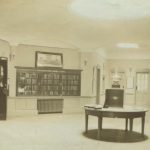 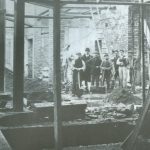 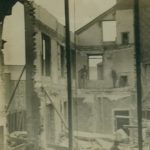 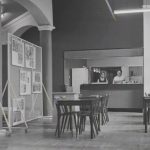 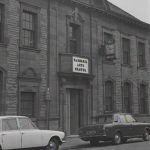 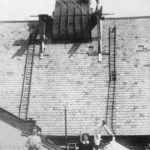 In 1962 the 1100 capacity Opera House in Workington was converted for use as a Bingo Hall, and the local amateur operatic and musical societies needed to find a new home. Although inadequate in terms of dressing room accommodation, the Carnegie ‘ Theatre ‘ was seen as the only viable option. Some modest improvements were made to the Lecture Hall in 1963 and the Librarian initiated a programme of music events.

In 1973 the Library Service transferred to a former Cooperative building on Oxford Street, and the Town Council made the bold decision to convert the former library into an Arts Centre. Further improvements were also made to the Lecture Hall including an extension to the property to provide dressing rooms in order for the building to be used as a theatre.

The Theatre’s programme of events was expanded during the 1980’s and Monroe’s Bar, a live music venue was constructed in 1985 from what was the former Town Council Chamber and occasional studio performance space. The Manager of the Carnegie Theatre and Arts Centre was given responsibility for Arts Development within the Borough of Allerdale which led directly to the creation of the annual Keswick Jazz Festival in 1992 and then the annual Maryport Blues Festival in 1999. The whole of the Carnegie Theatre and Arts Centre building was listed as Grade II in 1985.