Carnegie Singers are a community mixed voice choir. Founded in September 1973 by Gerald Gillett and named after the Carnegie Arts Centre.

Carnegie Singers perform several concerts throughout the year in Workington and the local areas using facilities such as theatres, churches, museums, village and church halls.

The range of music in the choir repertoire is varied and encompasses classical choral works, sacred music and anthems of all periods, including: 16th to 21st centuries, folk songs, songs from the shows, jazz and pop music. Carnegie Singers have had several pieces of music composed especially for them, and also have commissioned works. The annual programme supports local organisations and good causes, even providing choral music for weddings.

The group are conducted by resident Conductor and Musical Director Stephen Hunter-Brown and accompanied by accompanist Scott Miller. 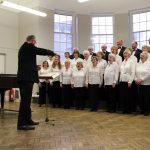 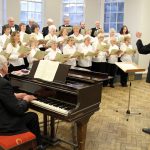 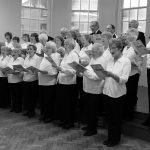 If you enjoy singing, the choir is a welcoming group to any new member, so come along to rehearsals any Wednesday evening (term-time only) 7:30 to 9:30 in the Carnegie. There will be no audition required. Enjoy the social gathering and share your musical interests with like minded people and benefit your well-being by the singing experience!